The Story of the photo – Alone in the wilderness

This time I bring to you the Story of the photo from my gradually maturing Project Rover (for more info see – https://markusnakus.cz/en/gallery/project-rover/). The pictures I wore in my head for some time were increasingly asking for realization. Before the end of 2017, it was finally decided to try it. This one was the first one in the series.

But the making of this picture was not sure at all – my friend Milan Strachota and I went to Central Bohemian Uplands and considered whether to take pictures of the landscape or try the Rover for the first time. We had our eyes tied to the sky all the time, trying to read the future out of it, at least as far as the weather concerned. The less clear the sky was, the more clear were our thougts – everything spoke for Rover.

Winding through the narrow snow-covered roads led us to the forest, where it was finally possible to leave the car without it obstructing the road. I put on the cloak and the belt with the sword. The dusk went down quickly and there wasn’t much time to find the perfect place; nevertheless, we found one clearer spot eventually. More fun was igniting the fire. Everything around was covered with wet snow, and my attempts with several kitchen towels I had in my car ended in a devastating failure. After about 5 futile attempts, there was one last option remaining – the roll itself, made of a hard, cardboard-like paper on which the last two napkins were waving. This variant finally proved to be functional and managed to make a more stable fire. 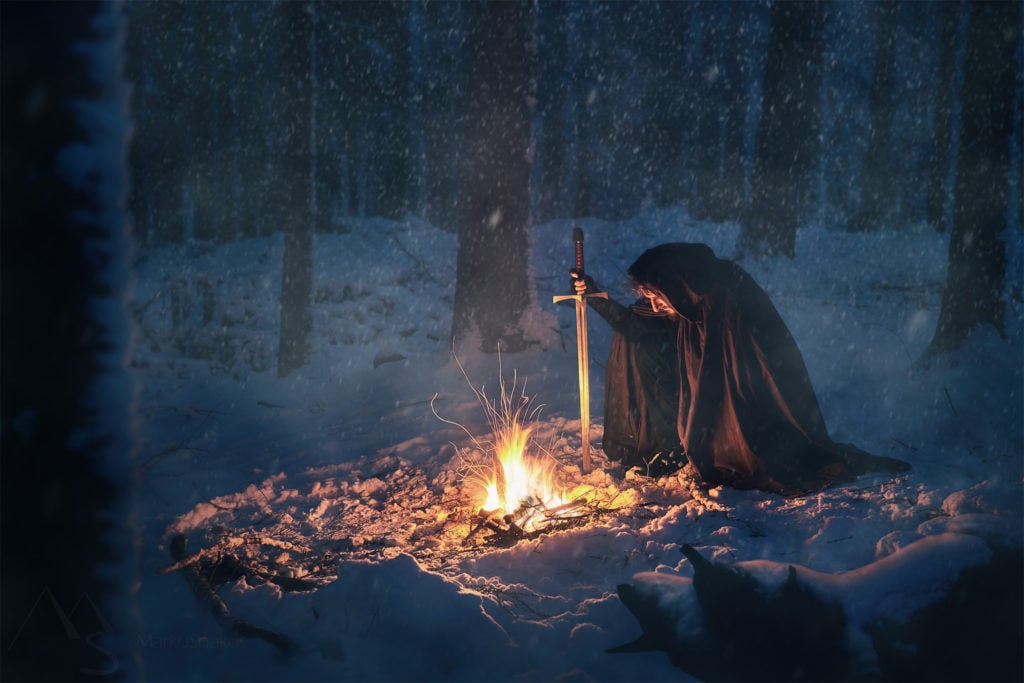 This was followed by a slight cleansing of the field from the branches, the preparation of a shot with the camera on a tripod, and then hooray to pose while my friend Milan pulls the trigger. Meanwhile, several cars managed to drive along the nearby road. We did not go far from it, because we really did not expect such traffic in these parts, but at the same time we did not stand right next to it, so we had a relative calm for the photo shoot. But – after a few photos taken, the dark forest was lit by rotating blue beacons…

At that moment it occurred to me that we are actually in a Natural reservation and although it wouldn’t be possible to start a forest fire there even with a gas canister, a fire here is officially not really supported (in other words – prohibited). That switch had to look really funny. From a rather stiff pose, I instantly went into a feverish extinguishment, grabbed fistfuls of snow and started throwing it at the fireplace. Then – just the darkness and a cloud of smoke. I was just waiting for police torches and gentlemen and ladies to come out from behind the trees. I imagined myself explaining to them that I was just passing by, wrapped in a cloak and with a sword on my belt… Well, fortunately there was no need for any explanations. The torche lights didn’t appear, and we quickly packed the equipment with the belief that I had all the photos I needed taken.

And I had. Still, there was a lot of work with the photo – I had never put myself to such an extensive retouching and montage, but I am satisfied, especially considering the strongly improvised circumstances of the creation, with the result. What I did with the photo on the computer is worth a separate article, which I probably write over time and publish on my Patreon profile, including samples before and after editing.