Although I originally thought that the Rover Project would be primarily about a thorough preparation, a clear intention and a predetermined location, virtually all (maybe except for the first one) of the last four photos were eventually created as one big improvisation. And the photo „Merging with nature“ is probably the biggest surprise for me.

With my friend and also photographer Milan Strachota we went to the Bohemian Switzerland in autumn 2018, originally with the intention to shoot primarily the landscape. It was quite successful eventually. But I also brought with me a “costume” for taking photos of Rover, though I had no clear vision – simply, if it were a taste to do it.
Especially due to the weather, which did not fully favor the views of the landscape, we decided to eventually go to the valley of Křinice river. The image of Rover wading through the stream was getting more and more clear in me. I decided to give it a try. After a few photos of the river itself, I placed the camera on a tripod in the stream, put the cloak on me and girted my belt with the sword. And then it started. 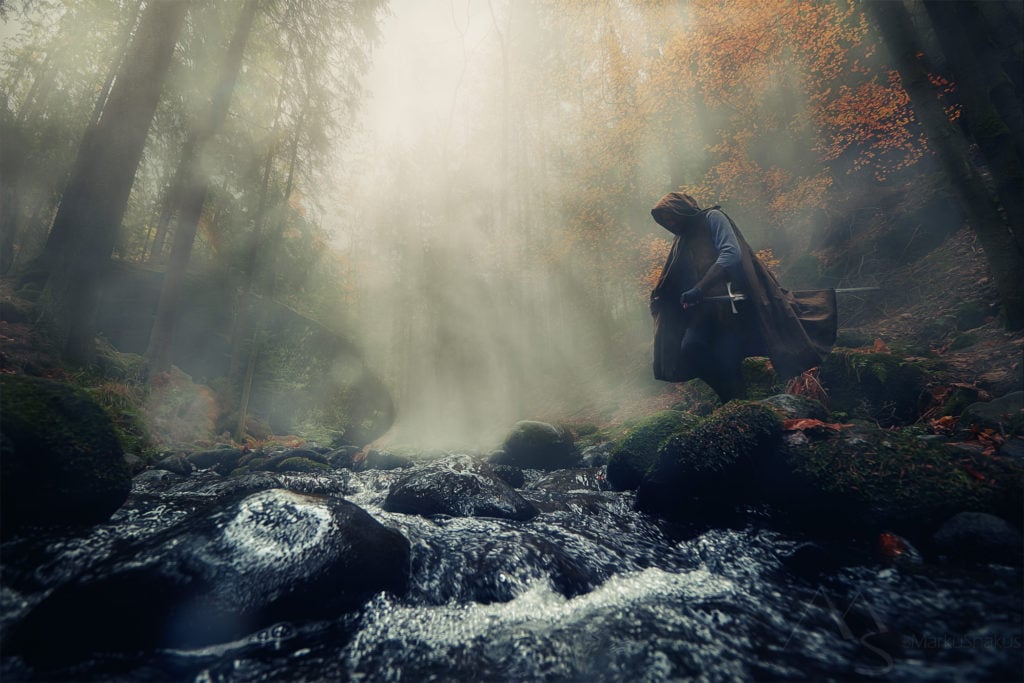 I was walking back and forth, soaking my shoes (as it turned out, thankfully really waterproof), my cloak and my pants in cold water. Sometimes I was rather comically balancing on stones, sometimes I was almost falling into the water, splashing water all around. At the same time, the original idea was that I would be standing right in front of the camera and catching a splash of water after I step into it. How wrong I was! I instructed Milan to hold the shutter with sequential shooting set, as soon as I walk toward the stream bed, to be sure we don’t miss anything. It turned out to be very wise. It also created this beautiful (and thankfully short) time-lapse „video“:

When this whole theater was over and I was looking at the resulting photos, this one immediately hit me in the eyes (as opposed to the ones I originally wanted to choose from). The charm of the fact that at the moment I practically did not pose and really mainly tried to successfully wade through the stream, resulted in that the character of Rover looks authentic and natural.

However, it is necessary to add that in this photo I (again) put myself to very advanced retouching and montage. E.g. there was no fog at the moment and it is all done in the post process. There was trully a lot of work with the computer, but I think the result is worth it. This was also confirmed by selecting the photo for a narrow selection of photos published in the prestigious web gallery 1x.com, which is a very nice appreciation of the work I devoted to the photo. About how I edited the photo, I intend to break down something over time as well.