Photo fuck up – The Guardian of the forest

It is quite common among many photographers (including me), that they sometimes write an article about how they managed to take some of their nice photos. About how they woke up unbelievably early to catch the sunrise, how they wandered God knows where, how they were hanging over some precipice, struggling with wildlife and all the elements available, and who knows who / what else just to reach their dream shot, which is actually even better than they could imagine, etc. etc. Yes, I also have a few “stories of the photos” and there is certainly nothing wrong with sharing these stories. But recently I thought of turning it a little bit around. How about sharing photos and moments when I completely failed, underestimated the situation or, on the contrary, overestimated my possibilities, prepared improperly, etc.? Kind of a photographer’s confession. I have no doubt that every photographer would have something to say. True, most of the pictures from such situations you will not see anywhere, but even those that, in the end, despite everything were worthy of publishing, sometimes have a story of horror and suffering behind them… And that’s the case of the Guardian of the forest photo from my Project Rover.

The vision was quite nice – to capture the figure of Rover sneaking through the woods, lit by the morning sunlight breaking through the mist and casting long shadows of trees on the ground… I managed to find a great place where during my scouting there were almost perfect conditions. So I took one or two purely documentation photos handheld, saying to myself that I will return next week for a proper photo shoot. 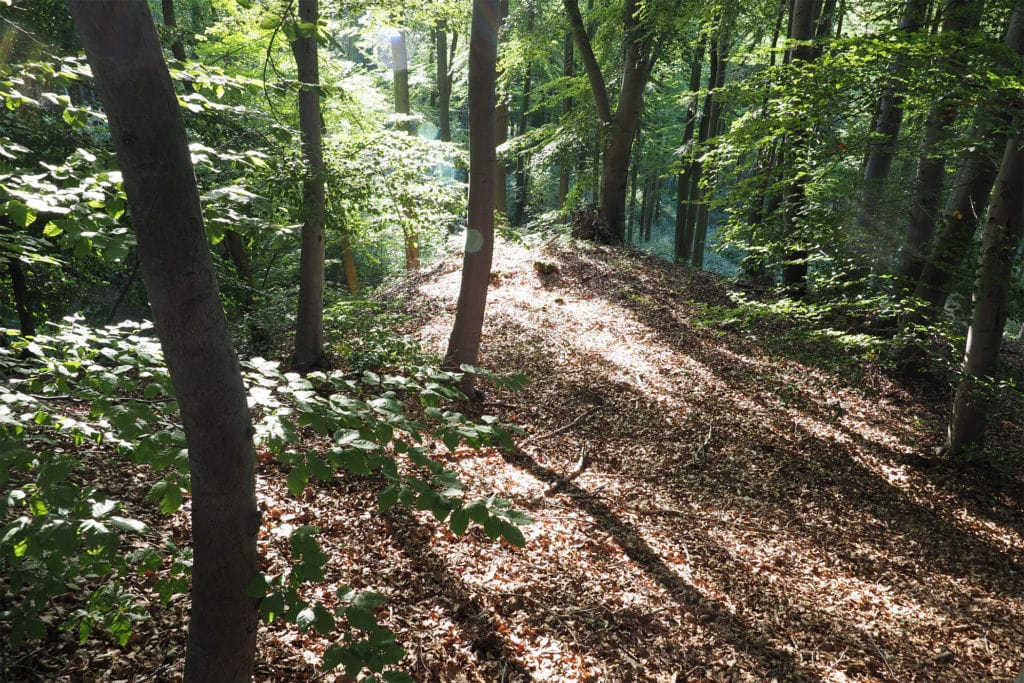 Original quick snap from the scouting

Of course, a week later the conditions were far from perfect. But I had a friend and a smoke bomb with me. Well, sun is not shining and there’s no mist around, but it doesn’t matter, we’ll create it no problem. The promotional photos and videos of the smoke bomb gave me the impression that we would probably cover the whole forest in a thick milky haze, so I was a little bit concerned not to scare off the hordes of mushroom-pickers (yes, Czechs are a nation of mushroom-pickers along with beer lovers:-)) moving all around. I put the smoke bomb on the ground, lit it up and went to pose for photos. Then a faint cloud of smoke flew past me and disappeared, blown by the wind away somewhere among the distant trees. That was it. Hmmm, that I didn’t expect. Well, screw it, I don’t care, I’ll paint in the mist in Photoshop and that’s it. We took a few shots from which at least some good Rover’s position could be chosen, and everything was then about how I deal with it in the post-process.

And there I sort of shoot myself in the foot (again). Since I still wanted those sunbeams to appear in my photo, I decided to try to use that carelessly taken snapshot from my previous scouting. Of course, I did not bother to shoot more exposures at the time, so in the given situation I had well exposed shadows, but in some places burned lights. But no problem, I can deal with it – something will be hidden, something cloned, and something left as it is, so at least it will be more authentic. And of course I’ll add mist.

Additional photo from the photoshoot – the light goes from different direction

As a result, I combined the first carelessly taken snapshot with the sunbeams in it, another photo with the Rover, plus one more photo to cover certain places, and added mist. I decided to combine photos from quite different conditions and to create other conditions that were not present on either of them. Another important thing – of course I didn’t shoot from exactly the same position and with the same angle of view as I did during my scouting, which quite comes to light in the forest with many trees, bushes, etc. in the frame. So trying to blend those three photos was really a challenge. I knew it would be very experimental, but today I know that I would definitely not go into it again. 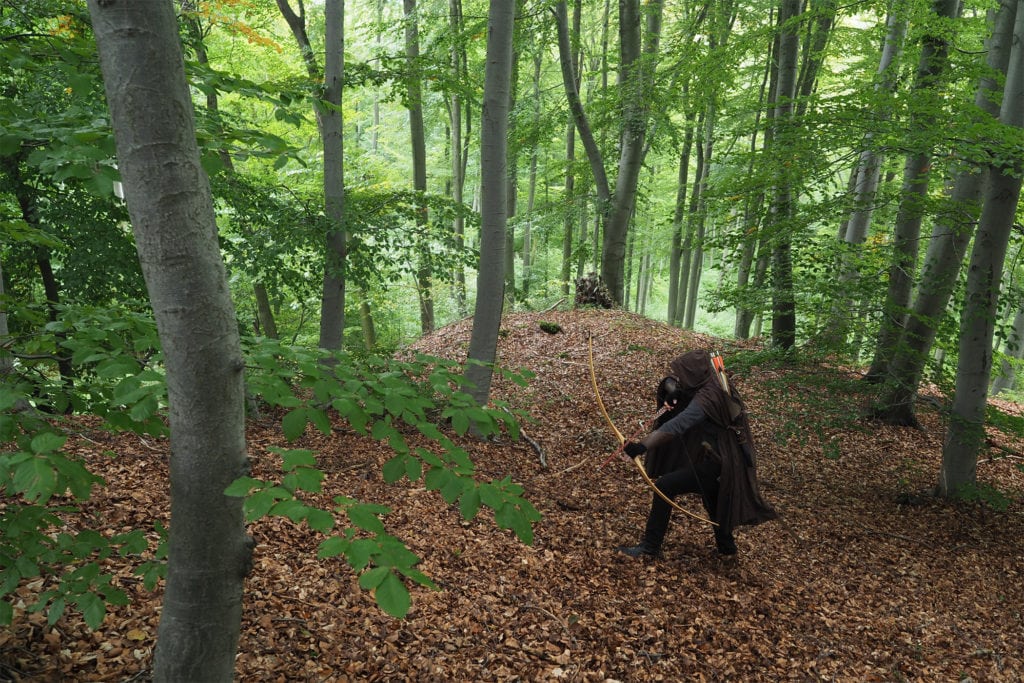 A photo from which the Rover himself was extracted

The first version to which led a long and thorny path of complex adjustments, shone in some places with almost unnatural green color and I did not like it at all. In the end, after many more editing, two more versions were created, which I liked at least a little more, but even so I knew that it would never be what I had hoped for. Finally, I combined them all into the most acceptable blending, and told myself that it was enough, as the photo almost started appearing in my dreams (and they really weren’t the pleasant ones). 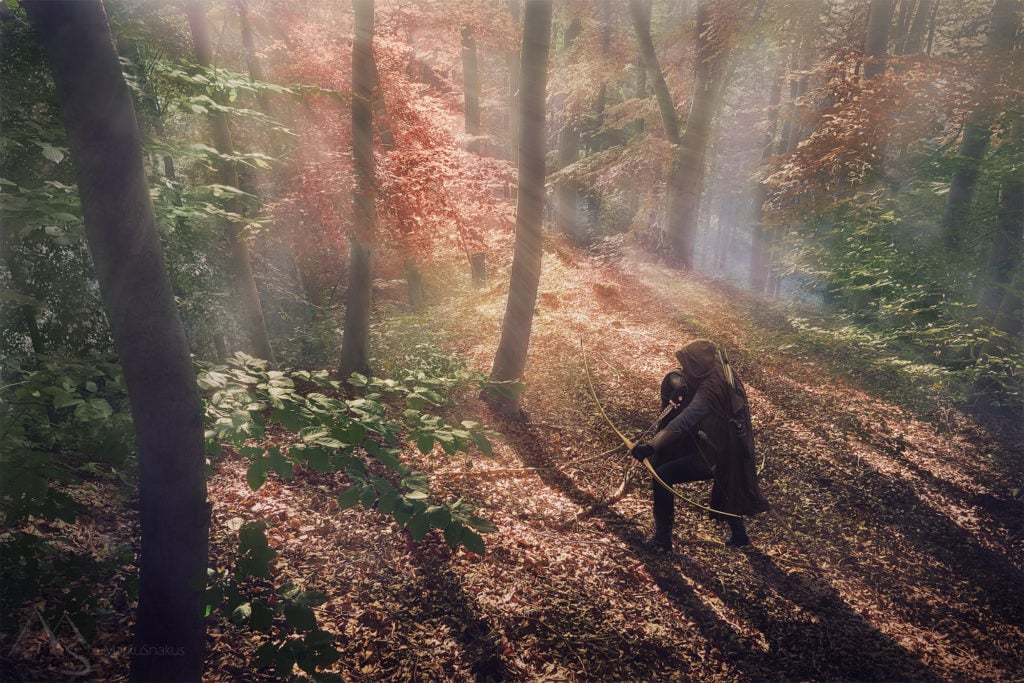 The final, hardly acquired photo – The Guardian of the forest

Even though I wanted hundreds of times to simply delete the photo, I eventually got to the stage where I was willing to publish it. True, concerning the starting conditions, I really pulled out what I could from it. Nevertheless, I surely see this one as a weaker part of the Rover photos and I know that I will never go into something like this again (or only with much better starting conditions). Also, I will not take any photos from the scouting just as a documentary, but I will handle them with more care and make more exposures (especially when the conditions are interesting). I can never know when such a photo will come in handy.

But what I will continue to do is experiment – because you never know what could come out of it and despite the occasional “fuck ups” you can possibly dig out some real treasures sometimes:-).